Wild Bill Hickok, W.D.Boyce, founder of the Boy Scouts, the Lincoln/Douglas debates, and so much more. These are people and events that helped build and shape the nation. And, they are all a part of LaSalle County History. 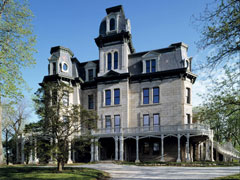 Hegeler Carus Mansion is listed as a National Historic Landmark, one of only 2,550 in the entire country. This architectural masterpiece, built from 1874-1876, is a key to the history of the Illinois Valley, the Midwest, and the nation. The home remained a private residence until 1995 when the Hegeler Foundation was formed to protect and preserve the home. The mansion is an example of high artistic achievement in architecture and interior design, yet also highlights accomplishments in industry, philosophy, publishing, and religion. One hour tours are available Wednesday thru Sunday at Noon, 1 PM, 2 PM, and 3 PM. 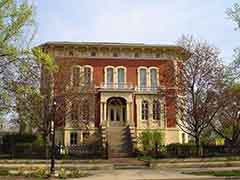 The Reddick Mansion, a wonderfully unique landmark, stands proudly on the corners of Columbus and Lafayette streets in Ottawa. This twenty-two room Italianate mansion has drawn attention for many years as a private residence, a public library, and a public office building. Built in 1858 by William Reddick, it remained the family home for thirty years. William Reddick was a respected businessman and politician, but he was also a philanthropist. With education being of utmost importance to him, he was instrumental in laying the foundation for the University of Illinois and the organization of free public schools in Ottawa. In accordance with the wishes of Mr. Reddick, upon his death the home became the property of the City of Ottawa to be used as a library. In 1974, the Reddick Mansion Association was chartered as a non-profit corporation in charge of ensuring the restoration, maintenance, and operation of the property. Visitors may tour the mansion several days a week; see website for details. 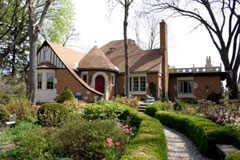 Streator is home to this charming country Tudor. Owner Ted Weber welcomes visitors to experience themed rooms and extensive gardens. The home was built in 1938 by his parents, Ernest and Zelma Weber. Ted became a radio interviewer for a Chicago station and had his own syndicated show. During his career he interviewed many celebrities and was able to travel extensively. His travels furthered his appreciation of architecture and art. Realizing the importance of preserving his family home, Ted Weber moved back to Streator in 1983 and has made it his passion. The Weber House has uniquely decorated rooms, which are appropriately named for celebrities he once interviewed. Each room reflects a different period design. The home now has a beautifully manicured English garden that is segmented into rooms. Mr. Weber, feeling the need to promote tourism in Streator, opened his home to the public. Open Daily 10AM – 5PM • April through October Unplanned Closings May Be Possible. Please Phone Ahead.

There’s no better way to explore the Illinois River than on an authentic paddlewheel boat. The narrated excursion is approximately an hour and leaves from Starved Rock State Park. Sails daily during the Spring, Summer and early Fall.

Climb aboard a replica 19th century mule-pulled canal boat and ride the route Lincoln traveled! Your guides, dressed as Canal era crew, will take you back in time to life on the American frontier and the Illinois Prairie. Meet our mules, and learn how horses and mules pulled passengers and cargo between Chicago and LaSalle. Group tours & private rentals are also available.

View our vivid outdoor murals that bring our wonderful history to life! Your cell phone becomes your time-travel machine! Listen to the strike of a pickax on stone as men struggle to build the canal. Hear the thundering hooves of a buffalo stampede. Tours begin from Reddick Mansion.

Pick up a copy of this illustrated guide to “The places, faces and ornamentation of Ottawa” and get ready for a magical history tour. Learn about the people who made Ottawa great and who built Ottawa’s breathtaking and imposing skyline.

Take a tour on a unique, fun, historic trolley. See website for a complete schedule of trolley day trips in the area. Trolleys are fully heated and air-conditioned.

Depicting agriculture in the early years of Mendota, this museum honors the farm families, their machinery, and their livestock. The Mathesius Brothers’ barn can now be viewed all day long through the large windows. Special tours of the Country Chapel and Mathesius Barn can be arranged by calling the Mendota Museum & Historical Society office.

Preserving the history of the Mendota area with an extensive collection of photography, “Wild Bill” Hickok collection, medical equipment from the early 1920’s, and much more. Open Saturday & Sunday 1-4 PM • March 1st to the 2nd Sunday in December

The LaSalle County Historical Society’s museum campus is located in the heart of Downtown Utica along the historic Illinois and Michigan Canal– itself a historic landmark. The museum campus features five facilities: the 1848 Canal Warehouse, the 1865 One-Room School House, the Heritage Center, the Blacksmith Shop, and the 1875 Barn. The Canal Warehouse displays an extensive collection of Native American artifacts, pioneer furnishings, and more. The Aitken School is furnished with period pieces and each year more than 1,200 children receive lessons and more from materials once used in one-room schoolhouses. The Heritage Center’s exhibits focus primarily on the 20th century and the military. Be sure to check out the coal mine exhibit. The Blacksmith Shop is still a functioning shop with forge and smith, just as it has since it first opened in 1892. The Barn next to the Blacksmith Shop houses agricultural exhibits from horse-drawn farm equipment to 19th century veterinary tools.

115 West Glover Street
Ottawa
(815) 433-5261
The guild has a membership of 1,000 worldwide. People come from all parts of the globe to study their genealogy in the guild’s library.

The Norsk Museum in Norway, Illinois is dedicated to the preservation of this rich Norwegian heritage.  The museum is in the former Hauge Lutheran Church, built by Rev. Elling Eielson in 1852, and was proudly added to the National Register of Historic Buildings.  Come visit us this summer, take a step back in time, and see where it all began. The Norsk Museum is open to the public Saturday and Sunday from 1 to 5 p.m.  June through September.  Private tours are available by reservation.

Promoting and preserving the colorful and proud traditions of Boy Scouting, Girl Scouting and Camp Fire, this museum features a vast exhibition of memorabilia from these organizations.

Visit the state-of-the-art Visitors Center to learn about trails, wildlife, vegetation and history of Starved Rock State Park. You will find interactive displays, fish from the Illinois River, historical artifacts, a wigwam, informational movie and much more.

The historic Westclox factory has a rich history dating back to the early 1900s. Know primarily as a clock-and-watch making company, this newly open museum portrays its fascinating history.

This memorial is dedicated to Father Pere Marquette, devoted missionary and heroic priest explorer, who established the first Christian Mass in the Illinois Territory.

This granite memorial honors those men and women who built and sailed LSTs during WWII, Korea and Vietnam. The last of the 157 LSTs was launched from Seneca’s shipyard on June 8, 1945. Dedicated in 2005.

Visit the only remaining toll house of the original four located on the I & M Canal.  The restored building, built in 1848, houses information from early days of the canal and the city of Ottawa.  A replica canal boat is also located at the toll house.  For a tour contact the Ottawa Visitor Center.

Connecting over 100 experiential nature sites, this diverse National Scenic Byway runs along both sides of the breathtaking Illinois River. Considered a “museum without walls”, the byway is sprinkled with natural, archaeological, historical and cultural attractions.

Erected in 1861, this 65-foot tall, 70,000-bushel capacity elevator is one of the oldest remaining grain elevators.

Memorials include WWI, WWII, Korean War and Vietnam. The park also has a WWI restored cannon, a Vietnam era helicopter, a statue of a sailor and a General Pulaski monument.

This granite memorial honors service members killed in the line of duty of any Middle East conflict from 1980 to present. It is one of a kind in the world and is believed to be the first memorial erected during a time of conflict.

Mendota
Memorials and canons next to the Hume-Carnegie Museum.

Memorial commemorates the location of the first Lincoln-Douglas debate on August 21, 1858, with heroic sized bronze statues complete with a reflecting pond outlined in limestone and fountain.

This memorial marks the birthplace of the legendary frontier scout and US Marshal “Wild Bill” Hickok.

This monument honors the hundreds of volunteers who met 1.5 million World War II soldiers and sailors on troop trains at the Santa Fe station, serving them coffee and sandwiches as their trains passed through. Often, it was the first snack and friendly face the troops had seen since their train ride began. The canteen opened less than two years after America’s involvement in the war began, often serving thousands in a day and drawing volunteers from throughout Central Illinois.